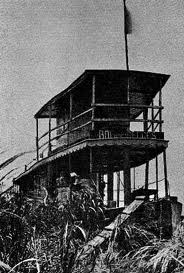 Read the following excerpt from Heart of Darkness very carefully. You may even wish to print this excerpt so you can underline important words and sentences. If you are uncomfortable reading from a screen, locate the passage in your text (pages 13-14).

**
"Finally I descended the hill, obliquely, towards the trees I had seen.

"I avoided a vast artificial hole somebody had been digging on the slope, the purpose of which I found it impossible to divine. It wasn't a quarry or a sandpit, anyhow. It was just a hole. It might have been connected with the philanthropic desire of giving the criminals something to do. I don't know. Then I nearly fell into a very narrow ravine, almost no more than a scar in the hillside. I discovered that a lot of imported drainage-pipes for the settlement had been tumbled in there. There wasn't one that was not broken. It was a wanton smash-up. At last I got under the trees. My purpose was to stroll into the shade for a moment; but no sooner within than it seemed to me I had stepped into the gloomy circle of some Inferno. The rapids were near, and an uninterrupted, uniform, headlong, rushing noise filled the mournful stillness of the grove, where not a breath stirred, not a leaf moved, with a mysterious sound -as though the tearing pace of the launched earth had suddenly become audible.


"Black shapes crouched, lay, sat between the trees leaning against the trunks, clinging to the earth, half coming out, half effaced within the dim light, in all the attitudes of pain, abandonment, and despair. Another mine on the cliff went off, followed by a slight shudder of the soil under my feet. The work was going on. The work! And this was the place where some of the helpers had withdrawn to die.


"They were dying slowly -it was very clear. They were not enemies, they were not criminals, they were nothing earthly now -nothing but black shadows of disease and starvation, lying confusedly in the greenish gloom. Brought from all the recesses of the coast in all the legality of time contracts, lost in uncongenial surroundings, fed on unfamiliar food, they sickened, became inefficient, and were then allowed to crawl away and rest. These moribund shapes were free as air -and nearly as thin. I began to distinguish the gleam of the eyes under the trees. Then, glancing down, I saw a face near my hand. The black bones reclined at full length with one shoulder against the tree, and slowly the eyelids rose and the sunken eyes looked up at me, enormous and vacant, a kind of blind, white flicker in the depths of the orbs, which died out slowly. The man seemed young -almost a boy -but you know with them it's hard to tell. I found nothing else to do but to offer him one of my good Swede's ship's biscuits I had in my pocket. The fingers closed slowly on it and held -there was no other movement and no other glance. He had tied a bit of white worsted round his neck -Why? Where did he get it? Was it a badge -an ornament -charm -a propitiatory act? Was there any idea at all connected with it? It looked startling round his black neck, this bit of white thread from beyond the seas.


"Near the same tree two more bundles of acute angles sat with their legs drawn up. One, with his chin propped on his knees, stared at nothing, in an intolerable and appalling manner: his brother phantom rested its forehead, as if overcome with a great weariness; and all about others were scattered in every pose of contorted collapse, as in some picture of a massacre or a pestilence. While I stood horrorstruck, one of these creatures rose to his hands and knees, and went off on all-fours towards the river to drink. He lapped out of his hand, then sat up in the sunlight, crossing his shins in front of him, and after a time let his woolly head fall on his breastbone. "I didn't want any more loitering in the shade, and I made haste towards the station. When near the buildings I met a white man, in such an unexpected elegance of getup that in the first moment I took him for a sort of vision. I saw a high starched collar, white cuffs, a light alpaca jacket, snowy trousers, a clean necktie, and varnished boots. No hat. Hair parted, brushed, oiled, under a green-lined parasol held in a big white hand. He was amazing, and had a penholder behind his ear.


"I shook hands with this miracle, and I learned he was the Company's chief accountant, and that all the bookkeeping was done at this station. He had come out for a moment, he said, 'to get a breath of fresh air.' The expression sounded wonderfully odd, with its suggestion of sedentary desk-life. I wouldn't have mentioned the fellow to you at all, only it was from his lips that I first heard the name of the man who is so indissolubly connected with the memories of that time. Moreover, I respected the fellow. Yes; I respected his collars, his vast cuffs, his brushed hair. His appearance was certainly that of a hairdresser's dummy; but in the great demoralization of the land he kept up his appearance. That's backbone. His starched collars and got-up shirt-fronts were achievements of character. He had been out nearly three years; and later, I could not help asking him how he managed to sport such linen. He had just the faintest blush, and said modestly, 'I've been teaching one of the native women about the station. It was difficult. She had a distaste for the work.' Thus this man had verily accomplished something. And he was devoted to his books, which were in apple-pie order
"Everything else in the station was in a muddle -heads, things, buildings. Strings of dusty niggers with splay feet arrived and departed; a stream of manufactured goods, rubbishy cottons, beads, and brass wire set into the depths of darkness, and in return came a precious trickle of ivory . . .


"One day he remarked, without lifting his head, 'In the interior you will no doubt meet Mr. Kurtz.' On my asking who Mr. Kurtz was, he said he was a first-class agent; and seeing my disappointment at this information, he added slowly, laying down his pen, 'He is a very remarkable person.' Further questions elicited from him that Mr. Kurtz was at present in charge of a trading-post, a very important one, in the true ivory-country, at 'the very bottom of there. Sends in as much ivory as all the others put together . . .' He began to write again. The sick man was too ill to groan. The flies buzzed in a great peace.