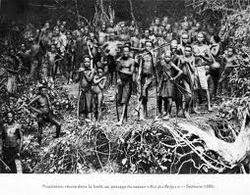 Read the following excerpt from Heart of Darkness very carefully. You may even wish to print this excerpt so you can underline important words and sentences. If you are uncomfortable reading from a screen, locate the passage in your text (pages 69-72).

***
"The dusk was falling. I had to wait in a lofty drawingroom with three long windows from floor to ceiling that were like three luminous and bedraped columns. The bent gilt legs and backs of the furniture shone in indistinct curves. The tall marble fireplace had a cold and monumental whiteness. A grand piano stood massively in a corner; with dark gleams on the flat surfaces like a somber and polished sarcophagus. A high door opened closed I rose.

"She came forward, all in black, with a pale head, floating towards me in the dusk. She was in mourning. It was more than a year since his death, more than a year since the news came; she seemed as though she would remember and mourn forever. She took both my hands in hers and murmured, 'I had heard you were coming.' I noticed she was not very young -I mean not girlish. She had a mature capacity for fidelity, for belief, for suffering . . . .


'You knew him well,' she murmured, after a moment of mourning silence.


" 'Intimacy grows quickly out there,' I said. 'I knew him as well as it is possible for one man to know another.'

'He was a remarkable man,' I said, unsteadily. Then before the appealing fixity of her gaze, that seemed to watch for more words on my lips, I went on, 'It was impossible not to --'


" 'Love him,' she finished eagerly, silencing me into an appalled dumbness. 'How true! How true! But when you think that no one knew him so well as I! I had all his noble confidence. I knew him best.'


" 'You knew him best,' I repeated. And perhaps she did. But with every word spoken the room was growing darker, and only her forehead, smooth and white, remained illumined by the inextinguishable light of belief and love.


" 'You were his friend,' she went on. 'His friend,' she repeated, a little louder. 'You must have been, if he had given you this, and sent you to me. I feel I can speak to you -and oh! I must speak. I want you -you who have heard his last words -to know I have been worthy of him.... It is not pride.... Yes! I am proud to know I understood him better than any one on earth -he told me so himself. And since his mother died I have had no one -no one -to -to --'


"I listened. The darkness deepened. I was not even sure whether he had given me the right bundle. I rather suspect he wanted me to take care of another batch of his papers which, after his death, I saw the manager examining under the lamp. And the girl talked, easing her pain in the certitude of my sympathy; she talked as thirsty men drink. I had heard that her engagement with Kurtz had been disapproved by her people. He wasn't rich enough or something. And indeed I don't know whether he had not been a pauper all his life. He had given me some reason to infer that it was his impatience of comparative poverty that drove him out there.


" '. . . Who was not his friend who had heard him speak once?' she was saying. 'He drew men towards him by what was best in them.' She looked at me with intensity. 'It is the gift of the great,' she went on, and the sound of her low voice seemed to have the accompaniment of all the other sounds, full of mystery, desolation, and sorrow, I had ever heard -the ripple of the river, the soughing of the trees swayed by the wind, the murmurs of the crowds, the faint ring of incomprehensible words cried from afar, the whisper of a voice speaking from beyond the threshold of an eternal darkness. 'But you have heard him! You know!' she cried.


" 'Yes, I know,' I said with something like despair in my heart, but bowing my head before the faith that was in her, before that great and saving illusion that shone with an unearthly glow in the darkness, in the triumphant darkness from which I could not have defended her -from which I could not even defend myself.


" 'What a loss to me -to us!' -she corrected herself with beautiful generosity; then added in a murmur, 'To the world.' By the last gleams of twilight I could see the glitter of her eyes, full of tears -of tears that would not fall.


" 'I have been very happy -very fortunate -very proud,' she went on. 'Too fortunate. Too happy for a little while. And now I am unhappy for -for life.'


"She stood up; her fair hair seemed to catch all the remaining light in a glimmer of gold. I rose, too.


" 'And of all this,' she went on mournfully, 'of all his promise, and of all his greatness, of his generous mind, of his noble heart, nothing remains -nothing but a memory. You and I --'


" 'We shall always remember him,' I said hastily.


" 'No!' she cried. 'It is impossible that all this should be lost -that such a life should be sacrificed to leave nothing -but sorrow. You know what vast plans he had. I knew of them, too -I could not perhaps understand -but others knew of them. Something must remain. His words, at least, have not died.'


" 'And his example,' she whispered to herself. 'Men looked up to him -his goodness shone in every act. His example --'


" 'But I do not. I cannot -I cannot believe -not yet. I cannot believe that I shall never see him again, that nobody will see him again, never, never, never.' "She put out her arms as if after a retreating figure, stretching them back and with clasped pale hands across the fading and narrow sheen of the window. Never see him! I saw him clearly enough then. I shall see this eloquent phantom as long as I live, and I shall see her, too, a tragic and familiar Shade, resembling in this gesture another one, tragic also, and bedecked with powerless charms, stretching bare brown arms over the glitter of the infernal stream, the stream of darkness. She said suddenly very low, 'He died as he lived.'


" 'And I was not with him,' she murmured. My anger subsided before a feeling of infinite pity.


" 'Ah, but I believed in him more than any one on earth -more than his own mother, more than -himself. He needed me! Me! I would have treasured every sigh, every word, every sign, every glance.'


" 'Forgive me. I -I have mourned so long in silence -in silence.... You were with him -to the last? I think of his loneliness. Nobody near to understand him as I would have understood. Perhaps no one to hear....'


" 'Repeat them,' she murmured in a heart-broken tone. 'I want -I want -something -something -to -to live with.'


"I was on the point of crying at her, 'Don't you hear them?' The dusk was repeating them in a persistent whisper all around us, in a whisper that seemed to swell menacingly like the first whisper of a rising wind. 'The horror! The horror!'


"I pulled myself together and spoke slowly.


" 'The last word he pronounced was -your name.'


"I heard a light sigh and then my heart stood still, stopped dead short by an exulting and terrible cry, by the cry of inconceivable triumph and of unspeakable pain. 'I knew it -I was sure!' . . . She knew. She was sure. I heard her weeping; she had hidden her face in her hands. It seemed to me that the house would collapse before I could escape, that the heavens would fall upon my head. But nothing happened. The heavens do not fall for such a trifle. Would they have fallen, I wonder, if I had rendered Kurtz that justice which was his due? Hadn't he said he wanted only justice? But I couldn't. I could not tell her. It would have been too dark -too dark altogether...."


Marlow ceased, and sat apart, indistinct and silent, in the pose of a meditating Buddha. Nobody moved for a time. "We have lost the first of the ebb," said the Director suddenly. I raised my head. The offing was barred by a black bank of clouds, and the tranquil waterway leading to the uttermost ends of the earth flowed somber under an overcast sky -seemed to lead into the heart of an immense darkness.